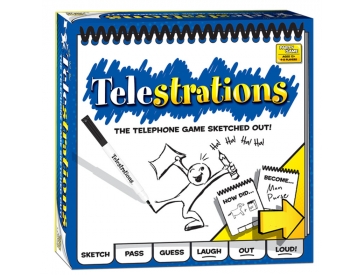 Did you ever play telephone as a kid? You know, that game where you whisper a phrase in a person’s ear, and then they whisper it to another person, and so forth, until it comes back to you? It never worked out, right? But that was the fun of it! Now you can play it as an adult and look cool doing it with Telestrations!

Yes, that was a subjective statement. Yes, you could look totally uncool playing Telestrations as I will explain.

“The Telephone Game Sketched Out!”

So this is how it works. Everyone gets a card with 12 words on it that they keep secret. The card has a hard and easy side, each with 6 words. Someone rolls a die, and whatever number comes up, that is their word. Each player writes the word on their sketchbook. Then, the game master starts the timer and everyone sketches it. The timer is about 60 seconds.

When the timer ends, players pass their sketchbook to the person to their left. That person has to guess what was drawn. They flip the page and write down their answer. When everyone has answered, they pass those books to the left. Now, the third person in line has to draw whatever word was written by the second person. This continues until your original sketchbook comes back to you.

When your sketchbook comes back, everyone reveals their answers and the sketches, and points are scored! Honestly, we have only scored points once, and that was with our nieces and nephews because we wanted to really follow the rules as and be good examples of rule-followers. Scoring really doesn’t matter because the drawings and the answers usually become so ridiculous. The true highlights of the game include talking trash about other people’s drawings, or discovering another person can really draw well. Or, in our group of friends’ case, how bad at guessing some of us are.

Fun For All Ages (That Can Read)

The box says 12+ for ages. Therefore, it may be surmised that either A) I can’t read or, B) I don’t care what the box says. The answer is “B.” (Yes, some still argue fervently for answer “A.”)

We’ve played this game with kids as young as seven. There’s only two adjustments you really need to make.

Seriously, this is a great game to teach kids so they can learn to follow directions and inspire their creativity.

Surprisingly, Not Fun When Playing With Drunkards

It’s true. Because you need to follow directions. Nothing ruins a game of Telestrations more than someone who is so drunk that they fail to flip the pages in the right order. Those people end up looking totally uncool.

However, if they are buzzed and the game master can babysit them somehow to follow directions enough, their pictures and guesses are “great!”

So, if you’re at a dry party and things are getting…dry…then Telestrations is the way to go. It’s engaging and creative. If you’re like me and you like to write long stories or sentences to describe a picture rather than a single word, then it can turn really fun! Okay. Maybe not for the person to my left.

For real Telestrations fun, don’t bother with the 4-8 player edition. Go straight to the 12-player. It’s the same exact game. Sure, it costs more. But if you have enough people, it gets really nuts.